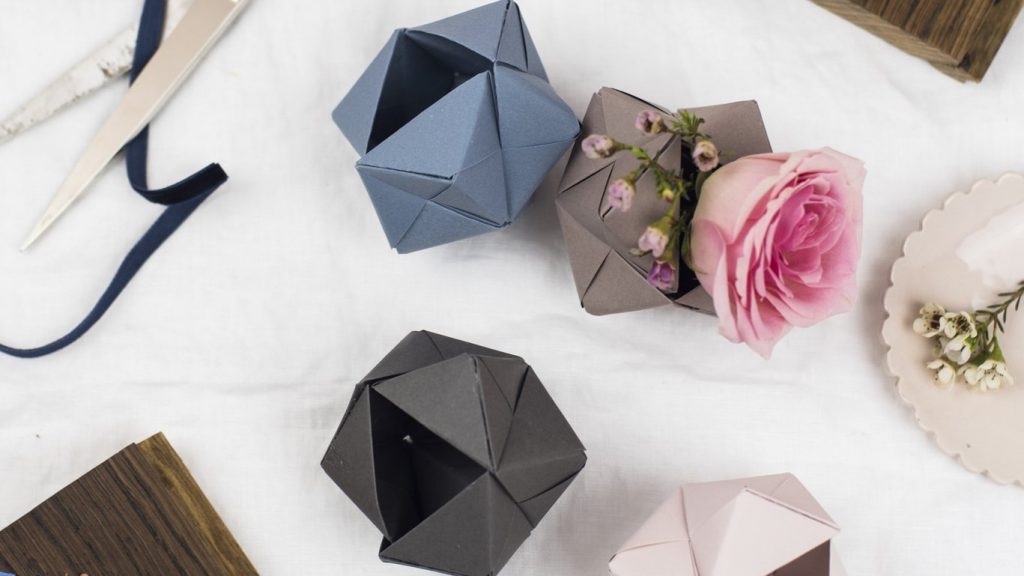 Love Paper gives you the facts about paper sustainability, and is here to inspire you to bring paper into your everyday lives. Paper origami demonstrates that you can create beautiful & exquisite creations from this extremely versatile product.

Origami is the ancient and beautiful art of paper folding, creating varied designs such as animals and objects, like the popular swan or boat shapes. The name origami stems from the Japanese language of ‘ori’ meaning fold, and ‘gami’ meaning paper. The creativity of folding paper is both a symbol of the peaceful traditions of Japan and the ingenuity of western culture. By taking a look at both the diverse history and the modern day, contemporary appeal of origami, we can see how this artform has remained a popular hobby.

The history of paper & origami

The origins of origami have been widely disputed over the years however most historians are in agreement that the medium of paper itself began in China. The paper making industry in China soared in 105AD when an easier and cheaper way of making paper, compared to that of parchment or papyrus, was invented. The method originated from a government official in China, Ts’ai Lun, who created his paper by mixing together finely chopped mulberry bark, hemp and rags with water, then flattening it out, pressing out the water and letting it dry in the sun.

The new process of paper making in China was soon adopted in Japan due to its popularity among Japanese Buddhist Monks – who brought paper to the Japanese mainland from China. It was around the sixth and seventh century when origami arose within Japanese culture, with many believing this to be the very first appearance of the artform.

Paper and the origami craft in Japan during the sixth and seventh century were seen as luxuries due to its high cost. Because of this, they were mainly used as offerings at religious ceremonies. However, throughout the Edo period – the period of 1603 to 1867 where Japan saw a period of peace, political stability, economic growth and traditional Japanese values – origami also began to be crafted recreationally.

The art of origami continued to evolve around the globe. During its growth in Japan, Europeans were still commonly using parchment or buying small qualities of paper at high prices from Egypt. By around 1250 AD however, Italy began their own paper-making industry and paper began to become more affordable throughout Europe as a result. Some historians believe that the tradition of origami in Europe can date back to the twelfth century and began when the Moors – invaders of Spain from North Africa – brought a mathematical adaptation of paper folding to Spain.

By the eighteenth century, the paper folding art of origami flourished within Europe. In a newly created curriculum system, origami began being taught to the younger generations who were quick to take up the artform. During this period, Germany and Austria also developed an evolution of the artform to create ‘Scherenschnitte’, which translates to ‘scissor cuts’. This modified style of origami saw scissors and glue being included in the craft design.

When Japan opened its boarders in 1860, as part of a modernisation strategy, they integrated both the curriculum system and Scherenschnitte into their own traditional method of origami. By the 1980s, enthusiasts of the hobby began to study origami mathematically which led to an increase in the complexity of origami pieces that can be seen today.

Origami today remains a delightful hobby for many. However, in recent years, there has also been a significant overlap between origami and engineering, which has helped to solve many modern-day problems.

An example of this is the addition of solar panels on spacecrafts. During launch, scientists needed to find a way of getting these panels into a compact space safely, while also being able to return to full size easily once in outer space. The solution came from a Japanese astrophysicist named Korya Miura. As a keen enthusiast of origami, Miura created an original crease pattern, named simply as the Miura fold. This technique allowed a piece of paper to be folded into a very small shape but when held at both ends and pulled, the paper will unfold, returning to its original shape. This inspired the method that was used for solar panel on spacecrafts. It was first used on a Japanese satellite in 1995.

Another example is origami being used in architecture. The mathematical principles of folding paper have been used to help architects create unique buildings. The wall designs of structures such as the Tel Aviv Museum of Art in Israel, the Basque Health Department in Bilbao, Spain and The Centre for Sustainable Energy Technologies in Ningbo, China, have all been greatly inspired by origami. These architects have been able to create striking geometric buildings that also help in decreasing heat gain due to their intricate designs.

As the innovation in origami continues to inspire scientific engineering, so too does it make its way into our everyday lives. Designers of contemporary paper folding can be found all over social media platforms such as Instagram and Pinterest, showcasing origami objects such as lampshades, flowers, hats and plant pots. One such designer, Esther Thorpe, has her own Origami business, ‘Origami Est’. From her business, she sells her own paper folded products to the public and runs her own workshops, teaching the craft to others both in person and online.

We asked Esther to tell us about her own origami journey: “I have always been really in to making 3D structures from 2D materials, but it’s only in hindsight I have realised this. At college I studied art & design and every major project resulted in me engineering something that you wouldn’t expect to be made from paper. I then refined these skills at university while studying graphic design. I mostly am self-taught as I strayed away from the print element of graphic design and grew in my passion for paper engineering. I love the endless possibilities there are to create with paper. I currently love finding new ways to decorate my structures – through embroidery, embossing & foiling.”

The concept of origami is continuously evolving, bringing innovation to the fields of engineering and art. From looking back at the history of origami, we see the ability origami has to inspire and how it has grown to be a larger part our modern-day lives.

If you like this story, you can be kept up to date by signing up to the paper chain. Just scroll to the bottom of this page to subscribe.