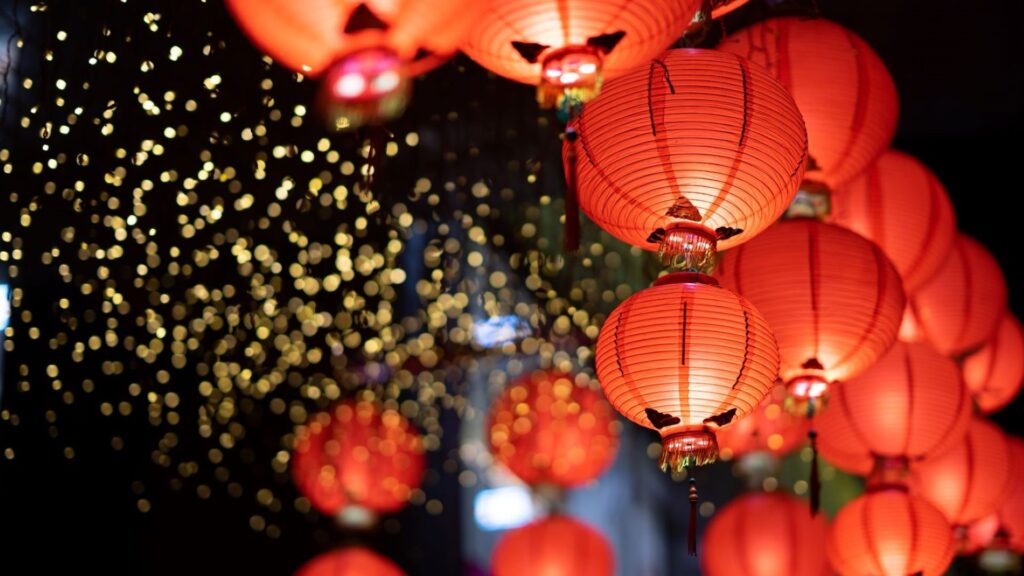 Traditionally to end the celebrations of Chinese New Year, also referred to as Lunar New Year, the Chinese Lantern Festival is celebrated. The Chinese Lantern Festival commences on the 15th day of the Lunar New Year and marks the first full moon in the lunar calendar and the start of the spring season. On the night of the lantern festival, the streets are decorated with colourful lanterns, often with riddles written on them as well as other festivities like fireworks, food, and dancing.

History Of The Chinese Lantern Festival

The first lantern festivities date back to approximately 2,000 years ago with the origin of the festival taking the form of many different tales. Here are two of the most well-known stories about the origins of the festival.

One of the most common origins of the lantern festival comes from a story that occurred during the reign of Emperor Ming. At the time of Emperor Ming’s reign Buddhism was growing in popularity across the whole of China. Ming noticed that the Buddhist monks would light lanterns on the 15th day of the first lunar month. Ming liked this tradition and ordered all households, temples, and the imperial palace to light lanterns on the same evening. From then it developed into a folk custom, thus the lantern festival was born.

A more fantastical story but still common in China follows the rage of the Jade Emperor. This origin of the lantern festival speaks of magnificent crane that flew down from heaven to earth. When the crane landed on earth it was hunted and killed by local villagers. This angered the Jade Emperor as he loved the crane so, he planned a storm of fire that would consume the village in his vengeance for the precious crane. The Jade Emperor’s daughter caught wind of the plan and warned the village of the storm intended for them. The village erupted into turmoil and panic over the imminent destruction of their homes, until an old-wise man suggested the villagers hang red lanterns in the streets and light firecrackers in the streets. The Jade Emperor was fooled into believing that the village had then become set a light and justice served. Thus, beginning the tradition to hang lanterns and set off fireworks on the 15th of the Lunar New Year.

Traditions Of The Chinese Lantern Festival

The main activity around the festival is lighting and appreciating the lanterns. However, lion dancing, dragon dancing, riddles, and food are all very popular traditions during the lantern festival.

Lanterns can be seen everywhere throughout the streets from houses, shops, and all throughout all local parks and pubic areas. The traditional style for the lanterns is for them to be red, as red in Chinese culture invokes the theme of good fortune. Lighting the lanterns is to symbolise illumination of the future. It is a way for people to express their hope for the year ahead of them and best wishes for their families.

The lighting of the lanterns can have another meaning in Taiwanese culture. In the Taiwanese Mandarin dialect, the word for lantern is pronounced very closely to the word meaning ‘to have a new-born baby’, so in Taiwan the putting up of lanterns could even express a wish for couples to have a baby!

Solving (guessing) lantern riddles is the one of the most important activities that contributes to the lantern festival. Lantern owners write and paste riddles onto their lanterns with colourful papers. People gather round the lanterns to see if they can solve the riddle. When someone believes that they have the right answer they rip off the answer and take it to the lantern owner and are typically rewarded with a prize.

Eating Tangyuan is an important custom at the lantern festival. Tangyuan, also called Yuanxiao, are balls of sugary rice boiled in a sweet soup. The reason they are so important to the lantern festival is the value of the pronunciation of the word. Tangyuan is pronounced very similarly to Tuanyuan, meaning ‘reunion’ and ‘completeness’, people believe that the round shape of the rice balls and the round bowls further symbolises this togetherness.

The lion and dragon are both very important symbols in Chinese culture. The lion symbolises bravery and the belief of driving away bad luck and evil. The dragon is a symbol of good luck within the culture. The dances can be witnessed all throughout the evening and the festivities of Chinese New Year.