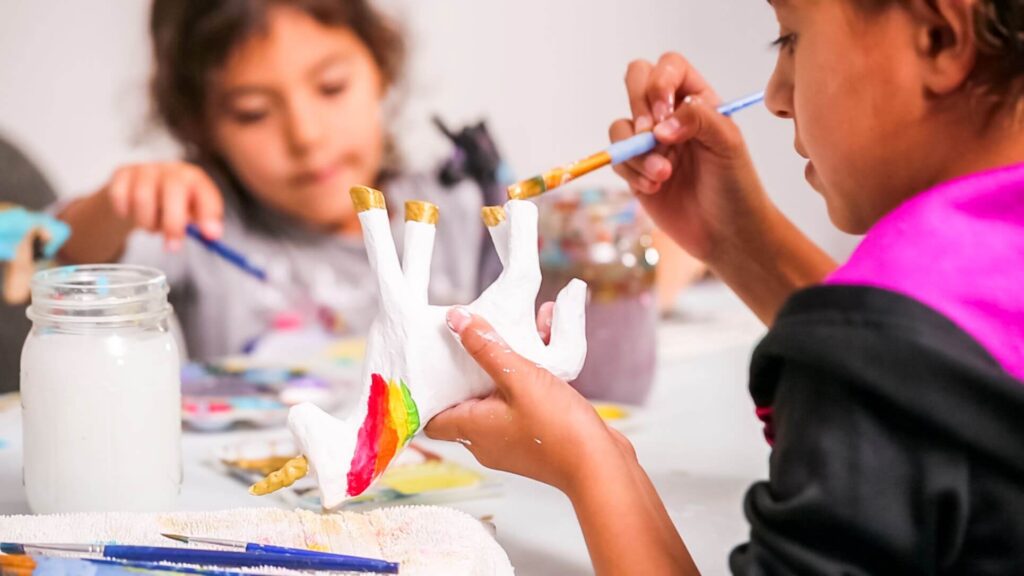 Papier Mâché: A Fun And Inexpensive Craft For All The Family

If you’re looking for ideas to keep children occupied during the long summer holidays, look no further than papier mâché. It’s a fun craft in its own right, but it can also be used to create any number of objects that will provide hours of entertainment until back-to-school time and beyond.

A Brief History Of Papier Mâché

Papier mâché was invented by the Chinese in about 200 AD, not long after they invented paper. Among the many things created with papier mâché, the Chinese even used it to make soldiers’ helmets! It’s doubtful these would meet today’s rather more rigorous safety standards. Papier mâché went on to be used widely throughout the East long before it was introduced to Europe. The ancient Egyptians used it to create death masks, while in the Middle and Far East, and most notably in Kashmir, it has been used since the 14th century to produce highly decorative objects, such as lidded boxes and trays.

Production of papier mâché objects didn’t begin in Europe until the 1700s when it was used as a low-cost alternative to plaster. Its popularity grew in Victorian times to such an extent that it was mass-produced, with items ranging from trays, workboxes and letter holders to furniture, including chairs, tables and even beds being manufactured. The papier mâché objects were decorated in a style widely known as “Japanning”, which sought to replicate the high-quality ornate black and gold lacquer work from East Asia that was popular at the time.

The term papier mâché is a curious one as it translates from the French as “chewed paper”, allegedly because the French workers employed in the factories would “chew” paper to turn it into pulp. It’s not a technique we would recommend – we share a much simpler method below along with some wonderfully creative papier mâché ideas to make at home.

The Basics Of Papier Mâché

What You Will Need:

Decide what you want to make! There are lots of ideas on the internet and we’ve picked some of our favourites to share with you here. Adult supervision is recommended.

For the mould: inflate a balloon to the desired size.

With a felt-tip, draw a line around the balloon to mark the top of the bowl. Apply several layers (at least three) of pasted paper strips all over the wide end of the balloon up to the line. Leave to dry overnight and then pop the balloon to reveal the bowl. If the bowl is too wobbly, you can make a base by forming a strip of cardboard into a ring and taping it to the bottom of the bowl with masking tape. Apply pasted paper over it and leave it to dry. Paint and decorate!

This and some other fun ideas can be found on this website: https://www.gathered.how/arts-crafts/paper-mache-ideas/

For the mould: carefully cut a plastic water bottle width-ways to create rings, alternatively, you could twist a sheet of dry paper into a circular shape before taping together the ends.

Wind the pasted paper strips all around and through the ring. Continue until you are happy that it is the right thickness. You can either make the surface as smooth as possible or create a textured surface by pinching or twisting the paper on the outer surface. Leave to dry overnight and then paint and decorate your bangle. Apply watered-down PVA glue to create a shiny, glazed finish.

For the mould: inflate a balloon to the desired size.

Apply three to four layers of pasted paper all over the balloon and leave to dry overnight. Once dry, pierce the balloon with a pin. With a pair of scissors, carefully cut the papier mâché balloon in half and cut holes for the eyes. Paint and decorate. Punch a small hole on either side of the mask, insert and tie a piece of elastic (or ribbon – whatever you have to hand) so the mask can be worn hands-free.

To make an animal mask, cut ear shapes out of cardboard and tape them to the dried papier mâché mask before applying more pasted paper and leaving it to dry. You can also create snouts and noses by layering pasted paper in clumps, or perhaps taping a cardboard tube to the front of the mask and applying pasted paper.

Piñatas have become a children’s party favourite and making your own is easy.

For the mould: create your desired shape out of card or a balloon.

Apply three to four layers of pasted paper all over the balloon and leave to dry overnight. Once dry, pierce the balloon with a pin. Cut off the narrow end to make an opening to insert sweets and other small goodies before painting and decorating. Tape ribbon or string to the top of the pinata and tie to a tree branch before bashing it open to release the contents.

These are just a few easier ideas to get started with, but for more advanced ideas, have a look at this site.