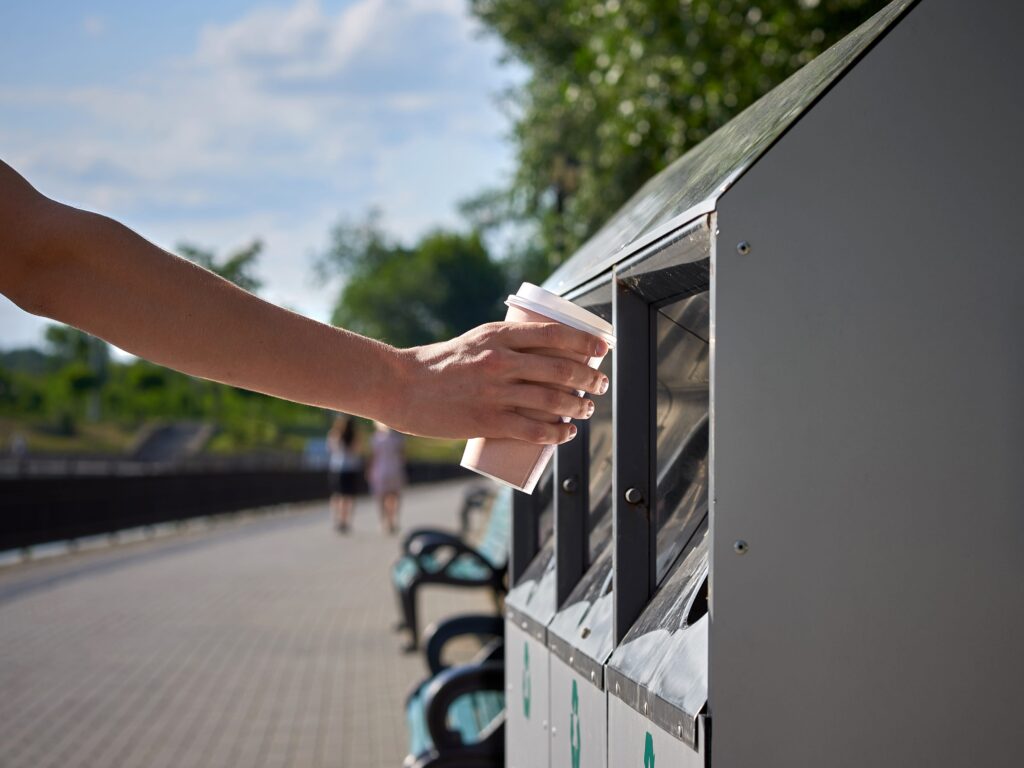 There’s been a lot of work in the area of coffee cup recycling over the past 12 months. We examine the schemes cutting down the 2.5 billion coffee cups sent to landfill every year.

When the UK media turned its attention onto the issue of recyclable coffee cups just over a year ago, there was a sudden flurry of industry activity designed to tackle the problem. Whether it was the development of 100% recyclable cups that had all the barrier and insulating properties of the traditional cup, or special litter bins that encouraged people to recycle, the industry has gone some way to cutting down on the 2.5 billion cups ending up in landfill every year.

But while the glare of the media spotlight may have dimmed a little, there’s been no let-up of activity, with a number of schemes, initiatives and ideas expanding to tackle the problem not only in the UK, but all over the world. From transforming tonnes of cups into sustainable packaging to making it simpler to put used cups into the recycling system, these schemes are making significant changes to the way the coffee cup industry is changing from a linear to a circular economy model. Here are just a few:

Earlier this year, the environmental charity Hubbub announced the launch of The Cup Fund, a brand new initiative that awards grants to projects that boost paper cup recycling in the UK. Supported by Starbucks and funds raised from a 5p charge added when its customers choose to use a paper cup, The Cup Fund is designed to introduce new recycling facilities, create new partnerships and encourage behaviour change across the UK.

After six months of sifting through the many applications for the grants worth between £50,000 and £100,000, Hubbub have recently announced the 12 winners of the investment, which collectively will make it possible to recycle an extra 35 million cups every year collected from 12 locations. Once collected, they will be sent to recycling facilities such as James Cropper’s CupCycling facility in Cumbria, where the cups will be transformed into new paper products such as packaging and stationery.

“We have recycled over 100 million coffee cups at our CupCycling facility already, but have the capacity to for up to 500 million per year,” said Richard Burnett, Market Development Manager at James Cropper. “Being part of these initiatives will enable us to give more used coffee cups a second life as premium paper and packaging products.”

Meanwhile, across The Channel, DS Smith have expanded their coffee cup recycling scheme to the Benelux countries. Having introduced the recycling scheme at their Kensley Paper Mill in the UK, the packaging company has been a key part of a nationwide effort to recycle coffee cups that’s taken the recycling rate from one in 400 to just one in 25 over the past two years.

The company now wants a repeat of that performance in Europe – the largest market of coffee drinkers on the planet – to tackle the 4.5bn disposable cups currently thrown away every year in Benelux. During a successful trial at its De Hoop Mill in the Netherlands, the programme recycled over 100,000 cups, and a full launch is expected later this year.

“We’re proud to be able to export our successful recycling formula to Europe,” said Miles Roberts, Group CEO of DS Smith. “But we need help: our biggest challenge remains getting hold of the cups. We’re calling on Governments to work closely with us to solve the problem of supply and ensure consumers put cups in separate recycling bins, knowing that they aren’t just recycled in theory, but in practise too.”

Of course, all this recycling activity depends on customers putting their disposable cups in the correct bin and not adding them to the general waste stream. But many cafés, coffee shops and food and drink outlets are now introducing special recycling points to their premises to encourage customers to recycle their cups.

While four of the major high street coffee chains (Caffè Nero, Greggs, McDonald’s UK and Pret A Manger) have joined a nationwide cup recycling scheme that funds the collection of takeaway cups for recycling, Pret A Manger have gone one step further by adding dedicated recycling points to 350 of its shops – almost 90% of its UK outlets. Stating that they will accept any high street coffee cups, they are actively working with waste management companies to ensure its coffee cups are collected, processed, and recycled.

There’s still a long way to go if we’re to make a significant impact on the 7.8 million coffee cups that are sent to landfill or burnt every day, but these initiatives are going a long way to achieving that.