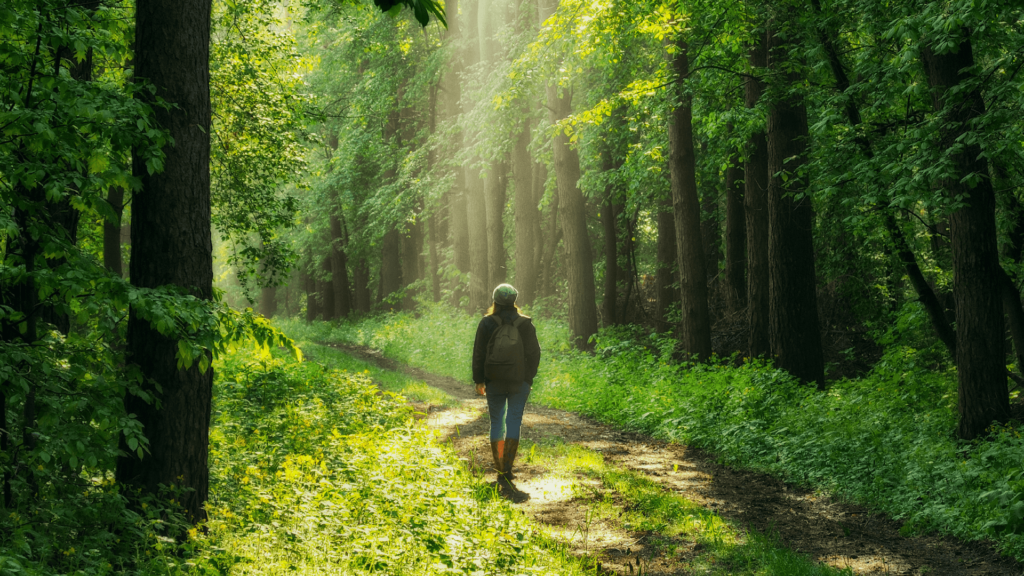 When was the last time you went down to the woods? Forests are a fundamental part of our lives and vital to the health of the planet, so why aren’t we taking more time to be mindful of what is on our doorstep?

It isn’t just the planet that is kept healthy and thriving by forestry. Here are 5 health benefits of the trees that are right outside your door.

When people talk about immune systems, you might not associate this with nature and wildlife. However, studies have shown that walking through a forest has numerous health benefits, with one examining the effect it can have on heart rate and blood pressure.[1]

Forests have been proven to boost a person’s immune system through the release of antimicrobial compounds (the things that help fight infection) found in plants and trees. Produced by trees primarily to aid with fighting infection, these compounds called phytoncides also work with our cells to help us combat infections within our bodies. So the next time you are strolling through a forest, make sure to take a deep breath and give your immune system a helping hand.

As well as studies into immunity, there has been an equal amount of research into the effect that walking through a forest has on heart rate and blood pressure.[2]

A study was conducted to determine the relationship between psychological responses and physical environments, which produced some interesting results. The study consisted of two groups of twenty four young adults. They were instructed to walk through a forest or an urban setting, and had their heart rates monitored as they did so. During the data comparison, it was noted that the heart rate and blood pressure during the forest walking group was significantly lower than the group that walked through an urban environment.

Given that higher heart rates and high blood pressure increase the risk of developing heart problems, forests can play an important role in reducing that risk.

3. Reduced Levels of Anxiety and Stress

Mental health charity, Mind, has studied the link between nature and mental health problems. Spending time in and around nature has been found to help with anxiety and depression. Research into ecotherapy (a type of formal treatment which involves doing activities outside with nature) has shown that it can help with mild to moderate depression. Being outside in natural light can be helpful if you experience seasonal affective disorder (SAD), which is a type of depression that affects people during certain seasons or times of the year.[3]

Not only can forests decrease stress and anxiety, there have also been links to increased serotonin levels and a feeling of general happiness when a person is exposed to forests and green spaces in their day-to-day life.

A recently conducted study into the correlation between forests and the need for antidepressants, has revealed that having a close proximity to trees was linked with a lower rate of antidepressant prescriptions. Additionally, living within 100 meters of a tree was associated with overall lower use of those antidepressants.[4]

As well as forests being important to general health and well-being, trees can also boost concentration in both adults and children. In particular, those with attention deficit hyperactivity disorder (ADHD) who, during a study, showed improved concentration after just 20 minutes in a park. The results of a Dutch study[5] showed that the need for ADHD medication was related to the amount of green space in a person’s local environment. It concluded that children who are most likely to benefit from green space tend to have the least of it.

The next time you are making plans for how to use your spare time, why not take a walk to your local park or forest knowing that you are investing in both your physical and mental health.